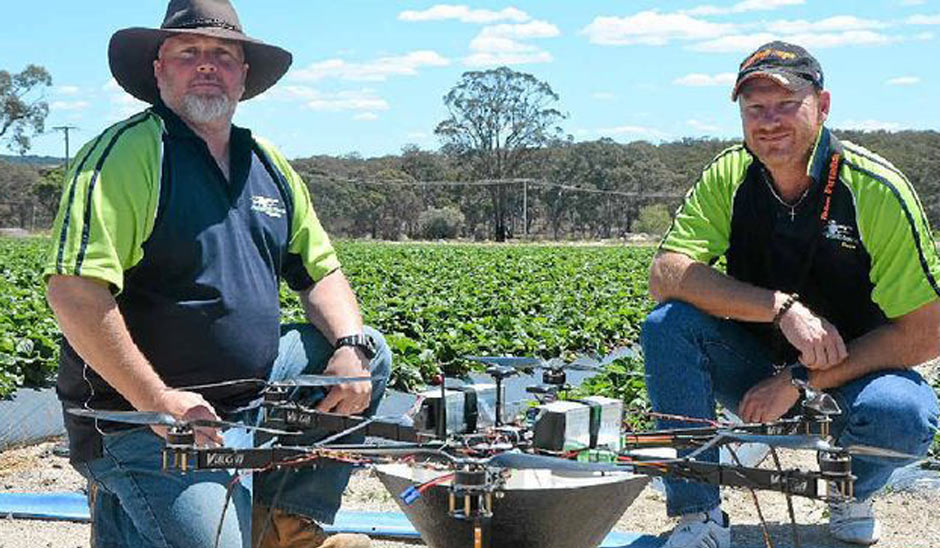 A NEED to find another way led Strawberry Fields manager Brendan Hoyle to invite a ‘hexacopter’ to fly over his Stanthorpe strawberry patch dropping predatory mites onto the plants below.

“Once we saw the trials and data start coming out of their Sunshine Coast season we thought we’d try it for ourselves to see if there’s a place for it at Strawberry Fields,” Mr Hoyle said.

Predatory mites have been a part of growers’ Integrated Pest Management (IPM) tool belt for roughly two decades as they eat the larvae of pests such as the two-spotted mite in place of traditional chemical sprays.

But as Aerobugs creator Nathan Roy, of Coolhaven Farms, sat in his tractor one day late last year watching workers distribute the capfuls of mites onto individual plants he thought to himself “there’s got to be a better way”.

“The banks kept coming to us saying we needed to streamline so I came up with this idea,” he said.

He set about developing the hexacopter – a six-bladed remotely piloted aerial system that distributes predator mites over broadacre crops.

“It’s all research and development at the moment, but our aim is to help farmers reduce their chemical usage,” Mr Roy said.

Once he had the idea he went looking for parts and met Glenn Bennett who at the time worked at a local novelty helicopter store and came on board to help build the unit.

“Nathan is the ideas man… I just come in and say ‘whoa hold on buddy, we can’t do that’,” Mr Bennett joked.

The hexacopter, which generally flies about four to five metres above the crop, has been operational for about eight months, during which time Mr Roy has been trialling the unit on his own Sunshine Coast property to impressive results.

“Usually a person would put a capful of the predatory insects on every 15th or so plant and you would have to wait for the bugs to move, which could take several weeks,” Mr Roy said.

“Now because of the mass coverage, even when the bugs land between beds they’re getting to every plant quicker.

“And so a process that once took several weeks can now take several days.

“The big difference for the growers is the reduced time taken to put the bugs out and the short time between application and the ecosystem being established.”

The two-spotted mite, which is the pest Strawberry Fields at Stanthorpe is trying to control with the aerial innovation, sucks the sap from the plant, inhibiting growth and production.

“In the long run it’s cheaper with the amount saved on chemicals and there is no issues with developing immunity because we’re dealing with bugs not sprays – it’s sustainable for the term of the plant,” Mr Roy said.

Mr Hoyle said due to a lack of arsenal of chemicals on hand, pests were developing immunities to commonly used sprays.

“Because we are also organic growers there’s no organically certified chemical that works well on two-spotted mites that we could use,” he said.

“Once we saw the trial work we thought we’d try it for ourselves and see if it has a place at Strawberry Fields.”

The system can be automated where the user would just program it using a GPS.

Local bug lady Kirsten Ellis said it would take between seven and 14 days before results could be measured.

While the focus is on strawberries, there is the possibility to use the method on other crops, including orchards, as the mites may be sprayed on top of hail netting.