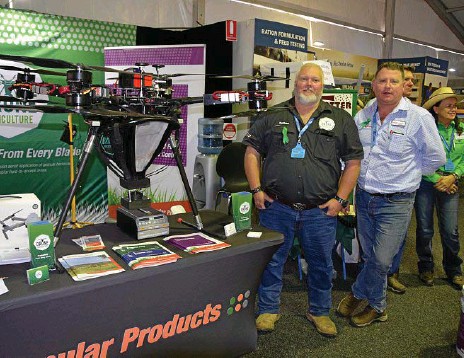 Drone is the talk of town

DRONES on farms are becoming more popular so it was not a surprise to see a few around Beef Australia this week.

Much larger than the average run-of-the-mill drone is the DroneAgriculture, a heavy-lift octocopter drone with a lift capacity of 20kg that can apply granule herbicides in confined areas.

DroneAgriculture is a joint venture between AeroBugs and Granular Products to provide a service where a chief pilot comes to the farm, flies the drone and sprays all of the infesting weeds.

“We saw a need to treat smaller areas and harder to access areas and we teamed up,” Granular Products’ Paul Hubbard said.

Drone Agriculture chief pilot and Aero Bugs founder Nathan Roy said: “Aerobugs has been going for five years and we have been doing a lot of stuff out in horticulture and in the cotton fields but this is the first time for us in the beef environment.”

“A lot of farms may need to focus their attention on other aspects of the business and other hard tasks on a bit of a hill or really thick pieces of noxious weeds, where we can just take that pain away from them,” Mr Roy said.

The services was thorough, the men said.

“We have someone come out into the paddock, assess it for different areas and we map it up into polygons and we gave that to Nathan,” Mr Hubbard said.

The drone has GPS point tracking and field-plotting technology which allows it to run along a pre-programmed track. Terrain following allows the drone to follow at the slope and depth of the ground while spraying through precision herbicide equipment.

“There is a platform we use to map up a flight plan and then once it is uploaded into the drone, you enable the autoflight and the drone will actually fly those weigh-points and you can turn the spreader on and off to release the granules,” Mr Roy said.

On a table in the RuralCo site, with long propellers and the tank in the middle, the drone has caught the eye of many passers-by.

Mr Hubbard said: “Beef is a great platform to launch any new technology, it is a pretty impressive machine and it draws a lot of attention, asking a lot of questions.”

Mr Roy said: “From the response we have had here, it is amazing, so many farmers have gone, ‘that is what we need, can you do this?’, a lot of people from everywhere, from Albury Wodonga, all the way up to the Atherton Tablelands, over in the Northern Territory.”

Mr Hubbard said: “We have also had inquiries from people and the Meat and Livestock Australia looking to do work with the prickly acacia in western Queensland,” Mr Hubbard said.

All pilots are trained and licensed with the Civil Aviation Safety Authority and have chemical accreditation.